In September, we hosted a group of 20 cruise line representatives during the Cruise Norway FAM trip in the northern fjord region. 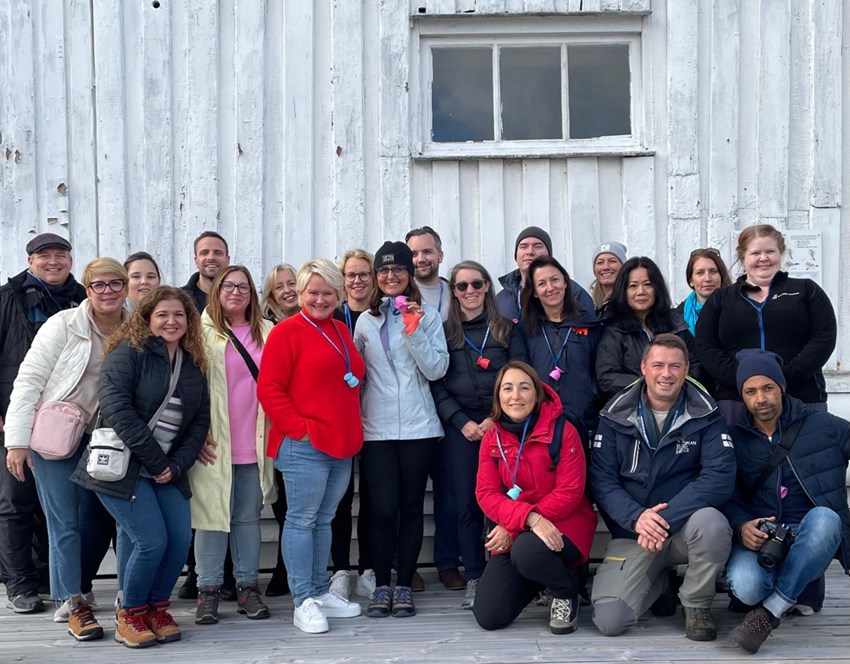 It was a pleasure hosting this amazing group visiting Kristiansund recently. Photo by Marit Karlsen/Cruise Norway.

The marketing company Cruise Norway arranges FAM trips for the cruise lines each year. This year, Kristiansund was one of the lucky ports in line.

The FAM trip started in Trondheim and headed via Kristiansund, Molde/Åndalsnes, Geiranger and Skjolden to Ålesund.

– This trip was originally planned for the autumn of 2020 and has been postponed several times during the pandemic period. It was very nice that we finally got it done and, in addition, with record-breaking participation, says cruise and marketing manager Erika Indergaard at Port of Kristiansund and Nordmøre.

The traveling party to Kristiansund consisted of 22 people. Port of Kristiansund hosted the group during the stay in Kristiansund, together with Visit Northwest. Here follows a short report:

The group arrived in Kristiansund in the afternoon and used the first hours to visit the highlights of the town centre. Kristiansund is spread out on four main islands at the edge of the ocean, with a charming harbour in the middle.

– We took the iconinc harbour boat, Sundbåten, to one of the islands, where we visited the Norwegian Clipfish Museum. We also visited Mellemværftet shipbuilding museum and the museum’s café Patrick Volckmar, a cosy café in 1950 style with its own coffee roaster, says product manager Synnøve Henden at Visit Northwest.

Sundbåten harbour boat is a trademark of Kristiansund, and we are very proud of its long tradition in the harbour, transporting the locals between the islands since 1876.

The Norwegian Clipfish (Bacalhau) Museum is in a well-preserved warehouse dating back to 1749, used for production of clipfish. You can still smell salt and clipfish. A tour of the museum gives the history of clipfish (dried and salted cod), which came to be of great importance in the development of Kristiansund from the 18th century to the postwar period. The museum is open daily in the summer season and for groups on request. Taste sample of traditional bacalao (stew of clipfish, potato, tomato and onion) is included in the visit.

Mellemværftet shipyard is a “living” shipbuilding museum in historical surroundings in the inner harbour of Kristiansund. Nice atmosphere with old boats, shipyard buildings and houses from late 1800s. In the winter season, groups can learn about traditional maritime practice and craftmanship, hear stories around an open fire and watch a blacksmith at work.

Patrick Volckmar museum’s café is a cosy café in1950 style with its own coffee roaster, over 100 years old.  Yvonne served us delicious coffee and chocolate truffles.

– We also managed a short and refreshing walk up to Varden to enjoy the view from the old watch tower, and Kirkelandet church, says Synnøve Henden.

Varden viewtower is open and accessible for free all year around and offers a 360-degree view of the town, the ocean, the fjords and the mountains surrounding Kristiansund.

Kirkelandet church was built in 1964 to replace the old one destroyed by bombs during the WWII. The architecture is modern and daring. When light flows through the 320 coloured glass windows in all shades of red and yellow, the 30-metre-high chancel wall is transformed into a symphony of colours.

Finally, we ended up at the small island of “Innlandet” and Thon Hotel Kristiansund. Innlandet is the older part of town with narrow streets and the best-preserved houses from old Kristiansund, as the town was bombed during the second World War.

We enjoyed a delicious dinner of “klippfisk” at the local restaurant Dødeladen, as well as dessert and coffee at the neighbouring old wharf Kjønnøybrygga from around 1885.

The first stop was Kvernes stave church, beautifully situated along the Kvernes fjord, where we enjoyed guiding and folklore tunes on the church organ. The church is one the youngest stave churches in Norway. The beautiful alterpiece partially dates from the middle ages and depicts Mary with the infant Jesus, and Anna, Mary’s mother.

A visit here is perfect to combine with the Atlantic Ocean Road. This is the main attraction for cruise groups visiting Kristiansund, only a 30-minutes drive from the cruise pier. This amazing and unique stretch of road takes you out to the ocean’s edge, running across an archipelago of small islands and islets.

We stopped for a walk along the elevated hiking path to really experience the salty and refreshing surroundings.

At the Atlantic Ocean Road, we met with the hosts from the neighbouring Port of Molde/Åndalsnes, and togehter we visited the Marble Caves at Bergtatt. The caves are a result of mining operations since 1938. The fleet ride into the caves, on crystal clear water, accompanied by enchanting lightning and soft music, was truly amazing. We were entertained by live wind music and also got the chance to taste the pure mountain water directly from the well far inside the mountain. We were served a warming soup and watched a video about the mining operations.

After this, we said goodbye to the group who continued to Molde/Åndalsnes and new adventures!

Thanks to the following cruise lines and cruise service providers participating with one or more representatives:

The stone steps up the Mount Kvernberget in Kristiansund are now finalized. Panoramic views awaits you at the top!

Strømsholmen Sea Sport Centre is located at the Atlantic Ocean Road. In addition to seal safari and diving, they now offer ocean safari with RIB boats.